Elita started her acting career in the short film "I'm 14 and I Hate the World", directed by her father, Kenneth J. Harvey, playing the starring role. For the following years, she had acted in several of her father's short films, her last role being Lucy on the TV show pilot "Bucky". On her Tumblr, she stated that she stopped because she "didn't like her own acting."[3]

In 2016, Elita met Melanie Martinez and worked as an Instagram model. Emma did two acting roles for Melanie in her music videos for "Tag, You're It" released on August 23rd, 2016 and "Mad Hatter" released on September 23rd, 2017.

Elita began her career with her debut single I Hate Everyone But You. The official audio was originally uploaded on YouTube on July 18th, 2018. On August 19th, 2018, she posted the song's official music video. 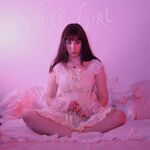 On June 21st, 2019, Elita released her debut extended play (EP), Sick Girl. The EP is centered around the perspective of people in different mental states, each one presented by their song title. It had one music video for the song Introverted, that was released on July 19th, 2019.

Melanie Martinez released her theatrical film "K-12" on September 6th, 2019, in which Elita plays the role of Angelita. It was her first time acting in a full length movie and her first since acting role since her appearance in Melanie's 2017 music video for Mad Hatter. The film was an online success, earning more than 30 million views on YouTube in less than a month. It also earned $303,230 in domestic box office being in theaters for only one night.

On December 6th, 2019, Elita performed her first show live at The Rockhouse.

Elita posted on her story announcing a new EP on December 15th, 2019. She said the EP is already fully written, but just needs to be recorded. She also announced that the EP will released somewhere in 2020 and earlier in the year, she released its first single that was revealed to be Void, the lead single.[7]. It was released on January 17th, 2020 along with its respective music video. She posted many self-care tips on her Instagram story, which may somehow relate to the upcoming EP.

Emma grew up in St John's, Canada and had a supportive family (her father, mother and sister) when it came to the arts. For several years she helped produce her father's films an stared as the main character in many of them.

She later left her early career to become an online personality on Tumblr, where she was not afraid of uploading sexual videos and gifs. She never engaged in any of the sexual things she mentioned because she was a teenager at the time. She received backlash from many people online after people found out about her page years later, forcing her to close her old Tumblr account. She made a new one later on and soon became an Instagram model.

Because of her many past experiences from interacting with people online, she became a sensitive and introverted person to strangers. She would occasionally still talk about many of her sexual interests with her followers, and prefers to be isolated to "regenerate."[8] Elita is a person who likes to be communicative to her fans, asking them questions through her posts and giving them her personal care tips and helping them feel better with themselves and become more extroverted unlike herself.

Elita mostly posts pictures on her Instagram of herself with many captions to try to interact with her fans and talk to them and try to be their friends.

Currently, Elita is dating Nasalovernumberseven, who has helped produce all of Elita's currently released and unreleased songs, although she and the band helped as well.

Retrieved from "https://yung-elita.fandom.com/wiki/Elita?oldid=1949"
Community content is available under CC-BY-SA unless otherwise noted.